Typos are like the annoying polyphonic ringtone in a meeting room.They are just lurking around waiting to happen , just when you thought nothing can seemingly go wrong……zap…..One of my greatest fears are TYPOS, and rightly so, I realized why I so dearly fear them.

If you’re the kind of person whose mouthpiece is an instant messaging software like the Microsoft communicator, sametime,gtalk,Y! messanger etc…, you tap out probably thousands of keystrokes every day, and it’s almost a statistical certainty that one (or more) will be wrong.And that day dawned on me not long ago.

About a couple of weeks back, I was running like a chicken with its head cut off. More prudent to say,I was a having a mid-week crisis with an ever growing list of pending tasks and having trouble concentrating on one at a time.

One such task involved writing a program during which time my brain conveniently nods off to sleep. You know, one gets into this overloaded mode where everything goes blank and you can’t even spell your own name. I had one such moment…a long moment infact..I forgot how to start the program.So I decided to buzz a teammate( a guy) over the office IM, Below is the conversation we had…

Me: hey, whats the query to do this thing ( the crap thing we do for a living )
Colleague : (smirks and types something)

Me: thanks! You’re a life saver.
Colleague: This also you don’t know ah?

Me : (grrr…thinking to myself)
Me: No Yaar…my mind got jammed for a sec!!

Then, no reply came from his end for sometime.
Did you know the keys x and c adjacent keys on a normal qwerty keyboard.Just then I realized , that I typed the letter “x” instead of a “c” in the last letter of the last word of the last line.Go figure! 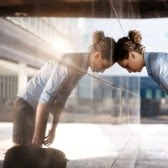 Posted by TheUncanny at 8:01 AM

Hahahaa.... back with a bang. Everytime i imagine the other ones silent reaction i cant help but LOL ;)

Ooooo now only i noticed i echoed gils comment :)

A post in the blog world with tons of comments all for a typo.

It's only you who can write anything about everything under the Sun clubbed with a bit of humour.

Btw readers would like to know the reason for the Hibernation from the blog world otherwise they may go on FAST.Venue could be infront your Office if not New Delhi :-)

FASTING is the buzz word these days.

Hey man, How've u been?
Funny thing after nearly a year, i still take DQ as a compliment :D , just like the good ol times....hehe..

//Btw readers would like to know the reason for the Hibernation from the blog world otherwise they may go on FAST.//

Ahem..Lets say the queen was in a drama of her own.. :P

Anyways, thanks Kiran for the warm welcome.. :) waiting for more and more comments from you to increase the count atleast :P

TheUncanny
Chennai, Tamil Nadu, India
I dont wear a belt for my pants, I'm a procrastinating insomniac,I cry in english,I'm very possessive of my nike shoes and red sock.I dont use the brake system in my bike, I've strained a ligament in my right knee a dozen times.I can never make up my mind on the color i like the most.I dream about snakes,boas,cobras alot.I re-read my books often.I re-watch my movies,I hated the movie Avatar.I have a great memory for things i like to forget.Someday, I want to dance in the rain when everyone's watchin...